Your child is communicating much earlier than his/her first spoken words. Gestures are social communication skills, which according to research, predicts the language ability of preschoolers 2 years later and academic success after that. Between 9 and 16 months, the child develops 2 new gestures a month, though the order and specific gesture may vary. 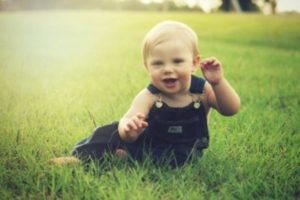 Having 16 gestures is a critical milestone to launch language and learning. When the child has an inventory of gestures, he has an ability to communicate symbolically. S/he understands that everything has a name/label. The child is ready for the next stage, the vocabulary explosion, where so many new words are learned so quickly and easily, which usually occurs at 18 to 21 months. When the child has 50 single words, s/he is getting close to combining words into two word utterances. Play sequences also expand to include two-step sequences. The child may not only feed a baby doll but may push it in a stroller and last put the baby to sleep.

The child learns most when s/he is able to share attention on the same focus as the adult. When the child is able to focus interest on one toy/object, then the parent/caregiver can follow his/her lead and can talk and share the activity. Gestures and words can be developed on this joint activity. The child’s world and language can be enriched.

Other social-communication behaviours should be developing by 9 to 16 months. These include eye gaze and an increased show of emotions, increased development in play, more intentional sounds and first words and improved comprehension of labels and actions. Gestures develop first and are the basis of further socio-communication and play skills. If these early social communication milestones are not solidly developed, the child may be at risk for delays with language.

Sharon can provide strategies to encourage these crucial early socio-communicative behaviours. Make a gesture of your own and call today.